A team of astronomers of a university has located a pulsing light signal which appears to be a pair of supermassive black holes. For science it’s really an incredible discovery because « this pair of black holes is so close together that they are emitting gravitational waves, which were predicted by Einstein’s theory of general relativity » explained Dr Suvi Gezari.

Black holes are harbored by the cores of glittering galaxies. These black holes are millions or billions of solar masses. Indeed, galaxies and black holes seem to develop together. The theory predicts that the galaxies collide and merge.

We know that it’s impossible to perceive black holes by themselves, but, thanks to their gravity they can pull in surrounding gas to form a distinguishable accretion disk. So, inside, the particles are accelerated to very fast speeds and release an important quantity of energy in the form of heat and produce powerful X-rays and Gamma rays. When this phenomenon happens to a black hole, we call this a quasar; it’s an extremely luminous object. 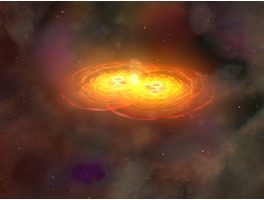